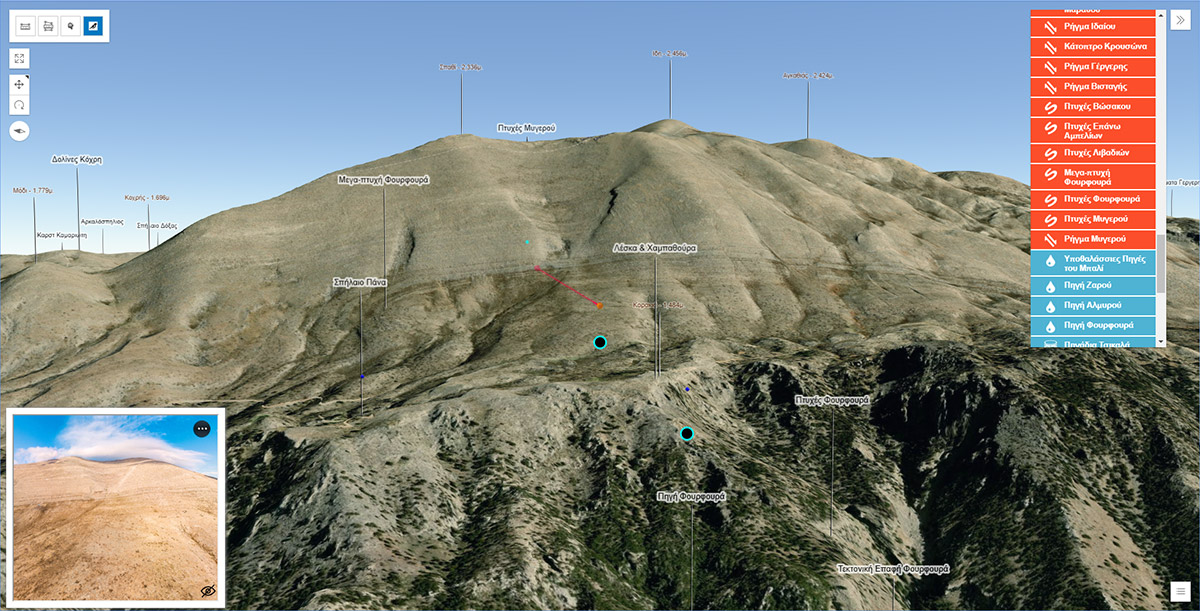 An alternative approach to Google Maps javascript API for making web mapping applications is the ArcGIS javascript API which I used to develop the maps of “Mygia’s route” geotrail and the Psiloritis geopark 3D map. These 3D maps are called web scenes and are running using WebGL. The system requirements for running the applications smoothly are demanding and out of date and low performance systems are incapable or finding it very hard to run them. According to the ArcGIS online official website, a minimum of 8 Gigabytes, with a dedicated graphic card of at least another Gigabyte is needed.

Below are the two examples from Psiloritis geopark that demonstrate some promising functionalities which can duplicate the Google Street view functionality embedded in the Google Maps. At least that is what I tried to do… The virtual tour in the bottom left of each of the two 3D maps, is the respective HTML5 virtual tour websites of the areas. The two maps have some differences mostly because the geopark one is a larger area with many points of interest while the trail one the scale is large and there are not so many point of interest. In Psiloritis maps there are no ‘slide’ bookmarks that exist in the Mygia’s map to navigate more easily between the trail’s point of interest. I did use a similar approach in Psiloritis map at one time by replicating the behaviour of the slide bookmarks, by making a GoTo select box with the options generated by the geosites feature class. This select box can been seen now only at the screenshot at the top of this post. I removed it to simplify the interface and hopefully challenge the user to interact with the map by using the built in navigation to explore the area.

In the first example is the map of the geopark of Psiloritis and in the second the area of a geotrail. These maps can be viewed in new tabs following the links links below:

In order to view the maps wide screens are recommended or / and viewing it in full screen.

Psiloritis geopark webscene map has more functionalities than the trail one at least at the moment. All the features are plotted in the 3D space, however since most of these are symbolised by 3D markers with predefined dimensions, it is hard to spot them when the scale is small (the user inspects the map from a distance). There is a breakpoint at 1/10,000 scale where most of the labels appear and features like mountain peaks too. The geosites points and the geotrails lines are always visible since they are the main information presented in the map.

The spherical panoramas as in the case of the Mygia’s trail are divided to the ground ones which are plotted on the ground and to the aerial panoramas, which are plotted 100 meters above the ground. As noted above the 3D markers (sphere for the aerial and inverted cone for the ground panoramas) have fixed dimensions, in order to help the user there is a tool with a bird eye icon that help them indicate the positions of the aerial panoramas. When this tool is selected the iframe of the virtual tour of Psiloritis is displayed and when the user selects one from the 3D map the respected panorama is loaded. If the user interact by changing the field of view from the virtual tour the 3D map changes accordingly to indicate the field of view of the panorama. At the same time a line of sight tool with the observer point at the location and height of the panorama is created and its single target point indicates the spot where the center of the panorama is aiming at.

Mygia’s trail is a proposed trail for the visitors of the geopark and is located north of Anogia settlement, on the way to the well known Nida’s mountain plateau. The area of the trail was photographed using photogrammetric methods and a total of 1 square kilometer of a very high resolution ortho photo mosaic was produced.

An ArcGIS web scene which is stored in my ArcGIS online portal is the base map of the app. Along with the ESRI world satellite imagery and the ESRI world elevation layer a much more detailed airphoto of the area and a detailed elevation layer are used to depict the trail in the 3D space. These high resolution data were the products of the aerial photographs of three drone flights made with the use of Pix4d capture that were processed in Pix4d Mapper. The final ortho image has a resolution of around 2 centimeters and with the combination of the respective Digital Surface Model (DSM) give a very realistic representation of the are. Both were uploaded in the ArcGIS online portal as tile layer (the image) and as a ground layer (the DSM) and used in the webscene.

The virtual tour is located and can be opened as a standalone website in the following address https://tours.nhmc.uoc.gr/geoparks/idi/index.html. It is embedded as an iframe in the webscene map and it will change the scene (panorama) when the user clicks on a aerial panorama of the map. At the same time a line of sight will be placed on the aerial panorama graphic and the line will point the bearing of the center of the panorama in the virtual tour. When the user stop dragging and changes the field of view of the panorama in the virtual tour the line will change accordingly to indicate where the user is looking at. 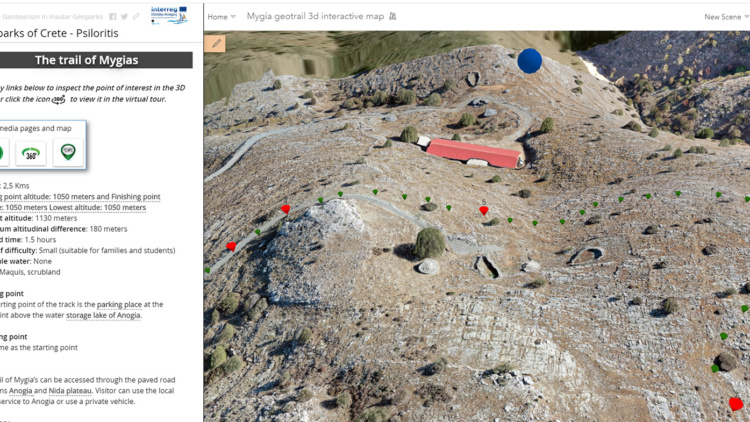 A presentation of Psiloritis geopark

A presentation of the UNESCO Global Geopark of Psiloritis mountain was developed using ESRI ArcGIS Story maps. The story map is actualy a website compiled from textual information, introduction videos, interactive 2D and 3D maps, virtual tours and multimedia galleries and other websites. 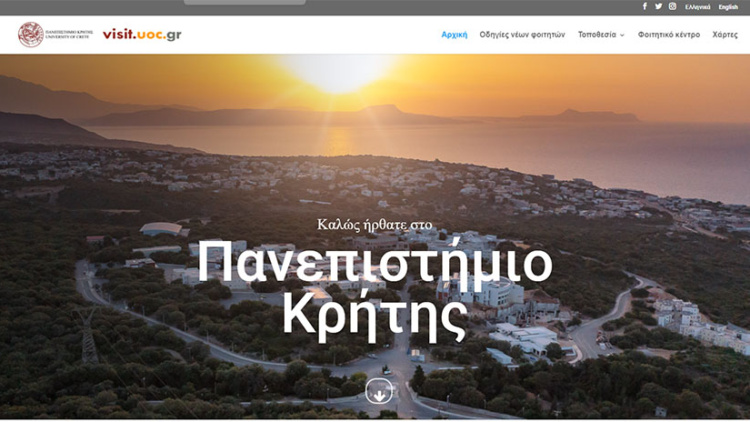